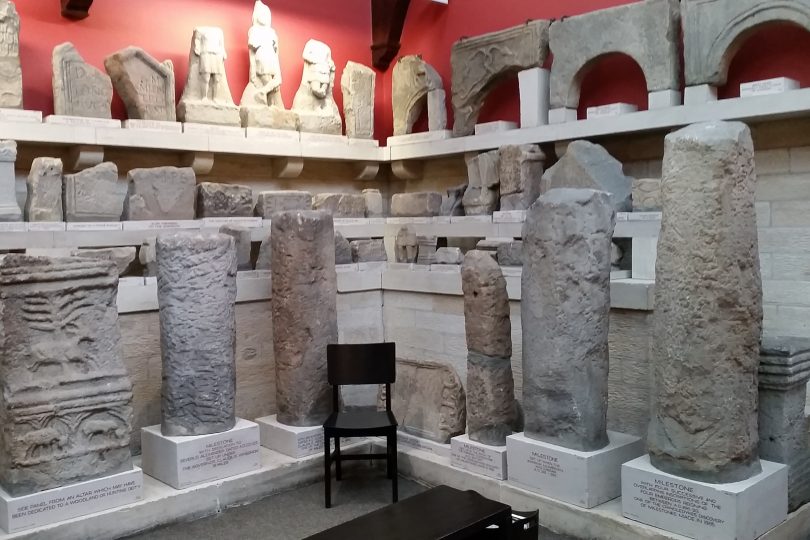 A selection of inscriptions and extracts from Roman writers on Britain.

To the spirits of the departed and of Gaius Iulius Alpinus Classicianus, son of Gaius, of the Fabian voting tribe, … procurator of the province of Britain.  Julia Pacata I[ndiana], daughter of Indus, his wife, had this built

The imperial procurators of the province of Britain issued this

To the spirits of the departed, …r Celsus, son of Lucius, of the Claudian voting tribe, from…., speculator of the second Augustan legion, An[tonius] Dardanius Cursor, Rubricius Pudens and …s Probus, speculatores of the legion (set this up)

To the spirits of the departed and to Vibius Marcianus centurion of legion II Augusta .  Ianuaria Martina, his most devoted wife set up this memorial.

To the Divine Power of the emperor, the province of Britain…

To the spirits of the departed and to Claudia Martina, aged 19.  Anencletus, slave of the province, (set this up) to his most devoted wife.  Here she lies.

For the Emperor Caesar Trajan Hadrian Augustus, son of the deified Trajan, conqueror of Parthia, grandson of the deified Nerva, chief priest, in his fourteenth year of tribunician power, three times consul, father of his country, the civitas of the Cornovii (set this up).

In Honour of the Divine House of the Emperor Caesar Titus Aelius Hadrianus Antoninus Augustus Pius, father of his country, three times consul, and to the Divine Powers of the Emperor, Marcus Ulpius Ianuarius, aedile of the vicus of Petuaria, presented this new stage at his own expense.

To Neptune and Minerva for the welfare of the Divine House, by authority of Tiberius Claudius Togidubnus, great king in Britain, the guild of smiths and those who belong to it gave this temple from their own resources, the site having been given by  […]ens, son of Pudentinus

To the holy god Serapis, Claudius Hieronymianus, legate of the Sixth Legion Victrix, built this temple from ground level.

To the spirits of the departed and Anicius  Saturninus, strator consularis (junior officer in charge of horses for the governor) made this memorial to himself.

To the god who devised roads and paths Titus Irdas, singularis consularis (auxiliary seconded to governor’s bodyguard) made a vow willingly, joyfully and deservedly.  Quintus Varius Vitalis, beneficiarius consularis (legionary seconded onto the staff of the governor) restored the sacred altar, when Apronianus and Bradua were consuls.

15. Base of a Jupiter column, Cirencester, third or fourth century (RIB 103)

To Jupiter Best and Greatest, his perfection Lucius Septimius…. Governor of Britain … restored this monument being a citizen of R…….

This statue and column erected under the ancient religion, Septimius, governor of Britannia Prima, renewed.

To Tiberius Claudius Paulinus, legate of the Second Legion Augusta, proconsul of the province of  Narbonensis, by decree of the council, the commonwealth (respublica) of the civitas of the Silures (set this up).

The Emperor Caesar Trajan Hadrian Augustus, son of the deified Trajan, conqueror of Parthia,  grandson of the deified Nerva, father of his country, in his fourth year of tribunician power, three times consul.  From Ratae two miles.

For the Divine House and the Divine Powers of the emperor, the people of Vindolanda (Vindolandesses) ( set up this)  sacred offering to Vulcan , willingly and deservedly fulfilling their vow under the charge of ……

To Jupiter greatest and best and to Vulcan, for the welfare of our lord Marcus Antonius Gordianus Pius Felix Augustus, the leaders of the villages (vikani) dedicated this from money contributed by the villagers

To the spirits of the departed (and) of Flavius Bellator decurion of the colony of York.  He lived for 29 years … months.

The … ward of the guild of Mercury

…of Atticus… without their offerings or contributions, gave from their own resources, this gift entrusted to them by the gild of peregrini (non-citizens or immigrants from other cities) dwelling at Silchester

This holy place, wrecked by insolent people and cleansed afresh, Gaius Severius Emeritus,  centurion in charge of the region, has restored to the Virtue and Divine Power of the Emperor.

To the goddess Tutela Boudiga, Marcus Aurelius Lunaris, sevir Augustalis (priest of the Imperial Cult) of the colonies of York and Lincoln in the province of Lower Britain set up the altar which he vowed when he set sail from York; he fulfilled his vow willingly and deservedly in the consulship of Perpetuus and Cornelianus.

Marcus Verecundius Diogenes, sevir of the colony of York, seafarer and citizen of Bituriges Cubi, set this up to himself in his lifetime.

To the goddess Sattada, the assembly of the Textoverdi fulfilled its vow willingly and deservedly

To the spirit of the departed, Barates of Palmyra, trader in ensigns, lived 68 years.

To the spirits of the departed and to Regina his freedwoman and wife, a Catuvellaunian, aged 30, Barates of Palmyra set this up.

(in Palmyrene script): Regina, the freedwoman of Barates, alas

Gnaeus Munatius Aurelius Bassus, son of Marcus, of the Palatine voting tribe, Procurator of Augustus, Prefect of Engineers, Prefect of the 3rd Cohort of archers, Prefect again of the 2nd cohort of Asturians, Census Officer for Roman citizens at the colnia Victricensis [Colchester] in Britain at Camulodunum, Curator of the Nomentum road, Patron of this same town, Priest for life, Aedile with magisterial power, Dictator four times.

Marcus Minicius Marcellinus, son of Marcus, of the Quirine voting tribe, from Lindum [Lincoln] for the honour of the eagle of the XXII Legion Primagenia Pia Fidelis  …. The goddess Fortuna

To the spirits of the departed and Marcus Ulpius Quintus of Nervia Glevi [Gloucester] frumentarius ( soldier responsible for corn supply) of the VI Legion Victrix, Calidus Quietus, his colleague had this made for his respected, most dutiful and deserving brother.

Documentary Sources: a selection of extracts from Roman writers on Britain.

Their bitterest hatred was directed against the veteran soldiers recently settled in the colony of Camulodunum, who were driving the natives from their homes, forcing them off their land, and calling them prisoners and slaves……..  Nor did it seem a difficult task to destroy a colony that was unprotected by any fortifications..…… a clamour was heard in their senate house, the theatre had resounded with wailing.

Suetonius made his way undaunted through the midst of the enemy to London, a town which, while not distinguished by the title of colony, was a very important and busy centre for traders and goods…….. The same disaster befell the municipium of Verulamium since the natives, with their relish for plunder and wish to avoid hard work, steered clear of the forts and military garrisons and made for places rich in spoil but unprotected by any defending force.

Agricola gave private encouragement and official assistance to the building of temples, public squares and private mansions.  He praised the keen and scolded the slack, and competition to gain honour from him was as effective as compulsion. Furthermore he trained the sons of the chiefs in the liberal arts and expressed a preference for British natural ability over the trained skill of the Gauls.  The result was that in place of distaste for the Latin language came a passion to command it.

42.   Letter from the Emperor Vespasian to the city of Sabora, Spain

Vespasian confirmed the taxes ‘ which you say you received from Augustus, but if you wish to introduce any new ones you should approach the governor about them, for I cannot make any decision if I have no advice on the matter.’

43.  Letter of the Emperor Trajan to the city of Prusa, Pontus-Bithynia

if the construction of the new baths will not burden the resources of Prusa, we can grant their request; only let no special tax be levied nor let any less revenue in the future accrue to them for their necessary expenses.