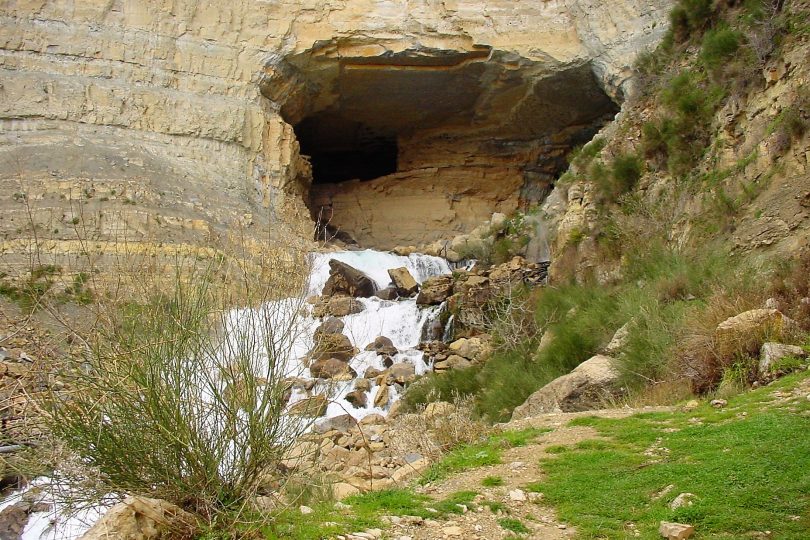 The waterfall at Afqa is the source for the River Adonis and is located on a 600-foot (180 m) bluff that forms an immense natural amphitheatre.[6] The river emerges from a large limestone cave in the cliff wall which stores and channels water from the melted snow of the mountains before releasing it into springs and streams below.[6] At Afqa, several watery threads flow from the cave to form numerous cataracts, a scene of great beauty.[6] The cave has over two miles (three km) of known passageways inside.[14]

A great and ancient temple is located here, where ritual prostitution was practicised until the time of Constantine.[15] Sir James Frazer attributes its construction to the legendary forebear of King Cinyras, who was said to have founded a sanctuary for Aphrodite (i.e. Astarte).[12] Reconstructed on grander scale in Hellenistic times, then destroyed by the Emperor Constantine the Great in the fourth century,[16] it was partially rebuilt by the later fourth-century emperor, Julian the Apostate.[6] The site was finally abandoned during the reign of Theodosius I[6] Massive hewn blocks and a fine column of Syenite granite still mark the site, on a terrace facing the source of the river.[12]

The remains of a Roman aqueduct that carried the waters of the River Adonis to the ancient inhabitants of Byblos are also located here.[6]

One thought on “Afqa, Lebanon”