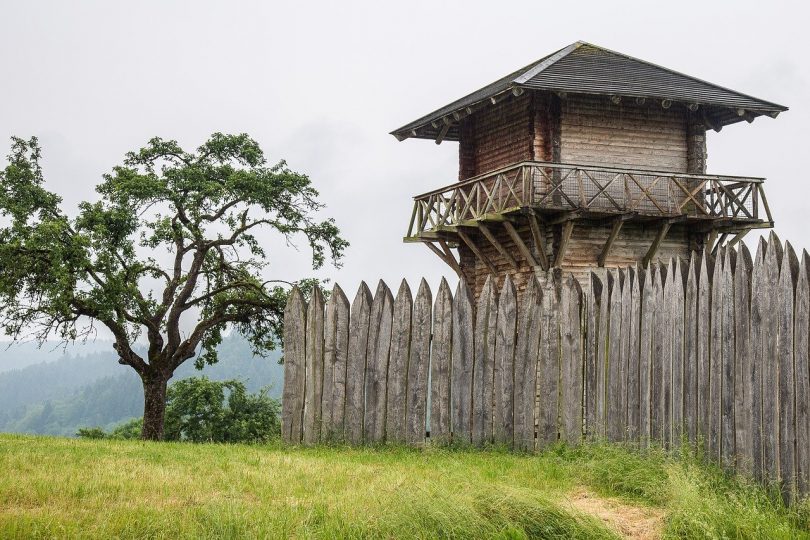 When Roman forces pushed eastwards into Germany from bases along the river Rhine from 12 BC onwards, they did so in order to establish Roman rule over the lands between the two great central European rivers running roughly from south to north – the Rhine and the Elbe. After initial successes by Drusus, the Romans faced a massive rebellion from AD 1 onwards, which eventually required the presence of Augustus’ newly designated successor Tiberius in theatre. In autumn of AD 4, Tiberius led a large army into Germany and stayed there, not returning to the bases on the Rhine for winter quarters. During the following year, the Romans not only operated successfully up to the Elbe, Tiberius also launched a major naval expedition tasked with exploring the coastline of Jutland; Roman ships probably entered the Baltic as well, though it is unclear how far eastwards they actually went. By AD 6 Roman attention had turned to the South East, where the Marcomannic kingdom of Marboduus presented the last obstacle to the establishment of a province encompassing all the land between the Rhine, Danube and Elbe rivers. Tiberius initiated a large-scale campaign involving a huge army of 12 legions against Marboduus, but eventually the Great Illyrian Revolt caused an end to Roman operations in Germany.

Already during Drusus’ campaigns in Germany, but even more so in the years following AD 4, the Romans established military infrastructure in Germany. Given the peculiarities of central European topography, with rivers providing access deep into the countryside both from the sea and from the Rhine, it is hardly surprising that Roman bases sprang up on or near important waterways. Perhaps the best-known examples are the forts on the river Lippe, which included smaller installations like the 1.2ha fort at Beckinghausen as well as the huge fort at Oberaden, which at 56ha could well have accommodated two or three legions within its walls.

While the Lippe apparently served as one of the main axis of Drusus’ operations from 12 BC onwards, with forts like Oberaden probably built during Drusus’ campaigns, a decade later the Romans also moved eastwards along the river Main. Here, around AD 5, a legionary base was established on what is nowadays known as the Kapellenberg, a hill above the Main near the present-day town of Marktbreit; the fort is to date the farthest east legionary base known in Germany (see fig. 1).

It is quite a remarkable place; as the site has never been built over it, and as it is nowadays easily accessible, it is possible to get a good impression of the size of a large Augustan fortress. A recent visit to the site gave the author the opportunity of taking some pictures, which serve to illustrate the brief description that follows below.

Travelling up the Main the Kapellenberg is a commanding position today as it has been more than 2000 years ago. Situated at the southernmost vertex of the so-called “Main triangle” (“Maindreieck”), it forms a spur rising steeply from the banks of the river Main (at around 180m) to about 270m. One side of the spur faces the Main itself, another one of its tributaries, the Breitbach, which joins the Main just to the West of the Kapellenberg’s tip. While both of these sides are steep, the rearward side of the – very roughly – triangular spur faces inland to the east and blends into the surrounding countryside, barely losing height. Thus one of the important features of the Kapellenberg is that it dominates the river, but does not dominate the surrounding countryside to the rear. Apart from its rather dramatic position – when one approaches it from the river, that is – the Kapellenberg in antiquity apparently also overlooked a ford across the Main.

Discovered originally in 1985 the fort was explored between 1986 and 1993. Fig. 2 shows the basic layout of the fort, which replaced a smaller and slightly earlier Roman enclosure, whose walls came to light during the excavations (A). While the course of the earth and timber wall of the main fortress (B) is irregular, following the topography of the Kapellenberg, the interior road layout was regular, with the via principalis running straight from the North East to the South West (C). Three gates were found (D, E, F), and a fourth gate will have been where the via principalis met the fortress walls (G). Several building complexes were identified inside the camp, including a large principia, a praetorium (H), the remnants of a barracks complex (I) and a large granary complex (K). Much of the interior of the fort appears to have been empty by the time the Romans left the site, yet outside the fort traces of a vicus were found, suggesting that Roman occupation was sufficiently long for people to settle outside the base. The site yielded very little material, which has led interpreters to suggest a very brief period of occupation. Given the size and complexity of the buildings that were actually erected, it seems clear however that the Romans originally meant to stay on the Kapellenberg. It has been plausibly suggested that the fort at Marktbreit was established in the aftermath of Tiberius’ operations in AD 5, perhaps during the preparations for a major campaign against Marboduus, and was abandoned in the aftermath of the defeat suffered by Varus in the Battle of the Teutoburg Forest. The Romans never returned to the site whose Latin name is unknown; present-day Marktbreit sprang up in the Middle Ages in the Breitbach valley.

Modern visitors approach the fortress in much the same way a Roman visitor travelling from one of the Rhine garrisons would have done. Leaving a suitable means of long-range transportation on or near the Main – a parking place on the banks of the river is probably near the location of the ancient landing site – one walks walking up the Kapellenberg, entering the Roman fortress near its South Western gate. While the structure itself has not been found so far, it is here that the main road of the camp reaches the ramparts, and as the best place for a harbour was down where the Breitbach joins the Main, that alone makes the existence of a gate highly plausible.

Image 1 shows the view in North-Westerly direction from the gate down to the river; the houses visible in the centre are already on the other side of the river. Just a couple of steps inside the fortress is a structure that makes it virtually certain that there was a gate nearby – a large granary. The multi-storey structure with a floor plan of 25m x 21m and an oven complex, which was similar to the slightly larger granaries in Anreppen, must have been a prominent feature of the fort due to its location near to the steep incline down to the Breitbach. One can only speculate that its whitewashed walls were visible to travellers on or beside the Main from quite some distance. While the building itself was apparently complete when the fort was abandoned, the archaeological record suggests it was never fully operating; it seems that the granary was finished shortly before the decision was made to give up the site.

Continuing the tour of the site and turning to the right the path roughly runs along the line of the Roman rampart. Soon one reaches the area were three barrack blocks were found, of which only the centurions’ quarters actually survived. It is unclear whether only these were finished before the fort was abandoned or whether intensive agricultural use of the site which continues to this day has destroyed all traces of them.

Image 2 shows the field where the barrack blocks were located; the ramparts of the fortress were beyond the track on the right. Turning left into the main area of the fortress means walking up the Kapellenberg.

Image 3 is taken about halfway up the hill and shows the view to the South. The views from this perspective are noticeably less dramatic than to the North, the hill sloping gently down to the valley of the Breitbach.

img. 4: Roman Fortress Marktbreit – view towards the summit of the Kapellenberg.

Turning around, the view towards the summit of the Kapellenberg is shown in Image 4. Had the fortress been completed, this area would likely have been filled with barracks and workshops. The via principalis ran roughly in parallel to the line of trees in the background, and to the far left out of sight lies the site of the granary complex.

The summit of the Kapellenberg was the area where the main buildings of the fortress were located; image 5 shows the area around the summit looking North. This was the centre of the fortress, and it was occupied by the principia and by accommodation for the commanding officers. The principia itself was a large building of 50x70m; it consisted of a large hall, an adjacent courtyard of 40x31m and several rooms, one of which may have served as the aedes of the garrison. Directly connected to the principia by means of a covered walkway was a building complex identified as the praetorium, a fairly large house with rooms arranged around a central courtyard serving as accommodation for a legionary commander. Apart from the principia and the praetorium other buildings were located on the Kapellenberg summit, which are usually interpreted as accommodation for other high-ranking personnel. A particularly interesting structure was found between one of these houses and the principia: a hall apparently fitted with a raised floor, which may have served as an additional granary or even as a temple.

Walking from the summit further to the North the Kapellenberg slopes down to the Main; image 6 shows the incline down to the Main on the left; the ramparts ran to the left of the track to the trees visible in the background, beyond which the northern corner of the fortress was. Turning to the left shows the view into the Main valley.

img. 7: Roman Fortress Marktbreit – view down into the Main valley.

As noted above, Marktbreit did not generally dominate the countryside, as the view to the South has shown; but it did definitely dominate the river Main, as the view looking towards the Southeast shows – in Image 8 the Main is on the far right, and the slope of the Kapellenberg is evident. The rampart of the fortress ran parallel to the track a few meters down the hill.

img. 9: Roman Fortress Marktbreit – looking towards the summit of the Kappellenberg.

Image 9 is taken from the same track looking back towards the summit of the Kapellenberg. While admittedly not overly exciting, it shows that the principia occupied the most prominent place inside the fortress and was probably visible from afar.

Turning again to the Northeast, the final image, image 10, shows the position of the former North-Eastern gate slightly to the left of the windmill. Again the sheer size of the installation is evident.

The legionary fortress on the Kapellenberg is an impressive site, even if basically nothing can be seen above the ground apart from some ramparts. As it has never been built-over and as much of the site remains free of trees or other vegetation impeding the views, the visitor can get a good idea of how huge these large Augustan installations were. One can only wonder at the impression the towering buildings on the Kapellenberg must have made on Germans used to live in lowly houses. Also, the fortress is a powerful reminder of how the Roman army operated in Germany and indeed elsewhere if the topography allowed it. Logistics of both armies in the field and army bases, be they temporary winter quarters or permanent bases, made heavy use of waterways, with supplies and heavy equipment transported as far as possible by ship; the Roman fortress on the Kapellenberg was ideally suited for such a purpose.

One thought on “A Roman base on the Kapellenberg – the Roman fortress in Marktbreit, Franconia.”