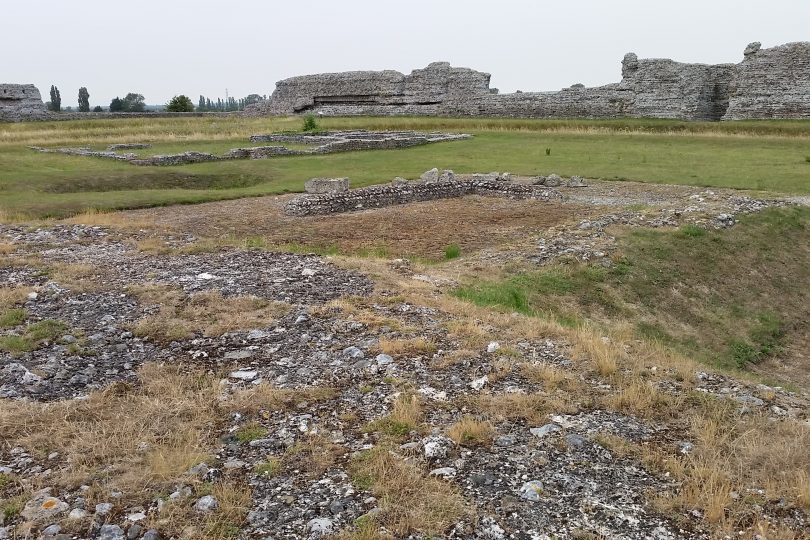 The study of the nine late-Roman forts in south-east Britain, listed as on the Saxon Shore in the Notitia Dignitatum, has never attracted the academic following afforded to the northern frontiers. Here, after producing a book, the researcher moved on to other areas. Given the limited range of evidence, no consensus on the strategic implication, if any, of the group has developed.

The forts are widely spread, but a glance at the map of Roman Britain suggests the possibility that the four forts in Kent – Reculver, Richborough, Dover, and Lympne could have operated in conjunction with the centrally-placed civitas capital at Canterbury, on a hub-and-spoke basis. Hence, linking the four sites in Kent in a tactical military response to a perceived requirement.

Before proposing any such system, it is important to compare the basic facts of date and nature of each site.

Canterbury has some traces of short-lived early military origin but the two cavalry swords from burials, found in 1979 and now in the museum, have been dated to the late second/early third century. The city stone walls have been dated by a coin of Tetricus of 271-274, and are unique in Roman Britain in that they did not succeed an earlier wall. They were also the latest built, but do not contain any tile coursing or stone patterning. The city itself seems to have continued to prosper into the early fifth century, but then went into rapid decline. Turning to the four forts in a clockwise direction around the hub of Canterbury:

Reculver, to the north-east, was situated on a promontory at the northern end of the Wantsum Channel which defined Thanet as an island. The area has suffered both deposition and erosion, so that the fort remains are now surrounded by land, but the seaward side has suffered 30% loss. Excavation produced evidence of short-lived first century occupation, thought to be military in nature, but the main remains are those of a fort, dated to AD 185-195. It passed through three recognised periods of use, finally being abandoned about AD 375. The type of walling, plain with rounded corners, and the regular internal layout are similar characteristics to the forts in the north, and this ties in with the unit listed in the Notitia as being the First Cohort of Baetasians, an early cohort of auxiliaries, attested at Maryport in Cumberland around the early AD 180’s.

Richborough is towards the southern end of the former Wantsum. Sited on an islet at the end of a jutting peninsula, it is now landlocked with some 15% eroded, but some 4km, from the sea. From a series of major excavations, it appears to be the site with the longest period of military usage in Roman Britain AD 43 – early 5th century. Initially, the Claudian invasion base and supply camp, there followed the erection of the Great Monument, a period in the second century of mainly civilian port activity, a small early-third century fort, and finally the major Shore fort of about AD 275. The Notitia listed the garrison as the Leg II Aug, the Second Legion Augusta, but whether this was a detachment, or the rump of the whole legion, is unknown. It is not known whether this was the garrison for the whole period of the fort’s existence. It may be that Germanic troops were present post-AD 400.

Dover has been the site of two Roman forts. The earlier was the British base of the Classis Britannica (the British fleet) built in two phases, the first dated to AD 117, and the second about AD 130-140. This went out of use soon after AD 200. The area seems to have lain empty until the construction of the Saxon Shore fort in the second half of the third century. Little is known of this fort; buried beneath modern Dover, the main recovery was the section of wall cutting through the ‘Painted House’. The destruction layer was dated to AD 250-270, giving a terminus post quem for the Shore fort. From other fragments observed, it appears that it was trapezoidal in shape. No evidence has been published as to the date of abandonment but given that Richborough was recorded as the port used by Count Theodosius in AD 368 it may have been by then. The garrison listed in the Notitia was the milites Tungrecanorum which was possibly an echo of the similarly-named second century auxilia cohort. The only substantial Roman feature visible today is the lighthouse on the East Cliff.

The fourth fort in the series is Lympne, which also had two forts, the earlier of which was also a fleet base, known only through the reuse of an altar in the later fort. The Shore fort was sited on a slope above an inlet of the sea, and like Richborough it has suffered both erosion with the loss of the south wall, and sea retreat, now 3km away. Although there is some dispute over the shape due to extensive land slippage it probably was trapezoidal in shape, as was Dover. From coin evidence it has been dated as being in occupation AD 260-350. The late unit attested was the numeri Turnacensium which, from its title, may have originated in modern-day Belgium. As far as is known, there were no signalling posts in the region.

From this evidence, there was a military presence, albeit variable, through the period under review. This rose to a peak from around AD 275-350 when all four of the Saxon Shore forts appear to have been in commission. How might the sites have worked together if there was a threat to face?
Travel between these sites by sea possibly was the norm when the Classis Britannica was operative. However, this is not an easy coast with strong tides, and the North and South Forelands and the Goodwin Sands to navigate. In addition, despite the coastal siting of these later forts, there is a lack of evidence of a proactive naval capacity. Road communication was more reliable for the movement of troops and information, particularly if Canterbury was acting as a central hub. Little information is available on dating the road network, but given that Kent was important in transport links to the continent, it may be considered that the roads radiating from Canterbury were early, and maintained into the fourth century.
The following routes, distances (English miles), and reference numbers are taken from Margary’s Roman Roads in Britain.
M11/110 – Canterbury to Reculver. 9 miles.
M10 – Canterbury to Richborough. 11.5 miles.
M1a – Canterbury to Dover. 14.5 miles.
M12 – Canterbury to Lympne. 15 miles
M100 – Dover to Richborough. 10.75 miles.
Margary also listed M131, linking Lympne to Dover, based on the Peutinger Table but admitted that the route is unknown, and it has not been shown on the latest OS Map. Using these distances with the travel rates for five hours from Vegetius for infantry of 18 miles (military step) or 22 miles (at full step); and from Mark Corby’s paper in Polybius to Vegetius (2002) for cavalry of 35 miles, it is possible to calculate some notional times for various scenarios.

So, from raising an alarm at any of these locations, it would be possible to assemble a force from the whole area within twelve hours of daylight, given a state of readiness and reasonable weather. It may be significant that Canterbury had been walled at the beginning of this period of seventy-five years, possibly as the residence of a regional military commander.
Such a system as outlined based around Canterbury was possible, but whether it existed in reality can only be conjectural. Despite literary references to pirates and raiding, there is little in the form of destruction or abandoned sites to show evidence of incursions. Did they happen, or is the lack of such evidence a tribute to the success of this notional system?