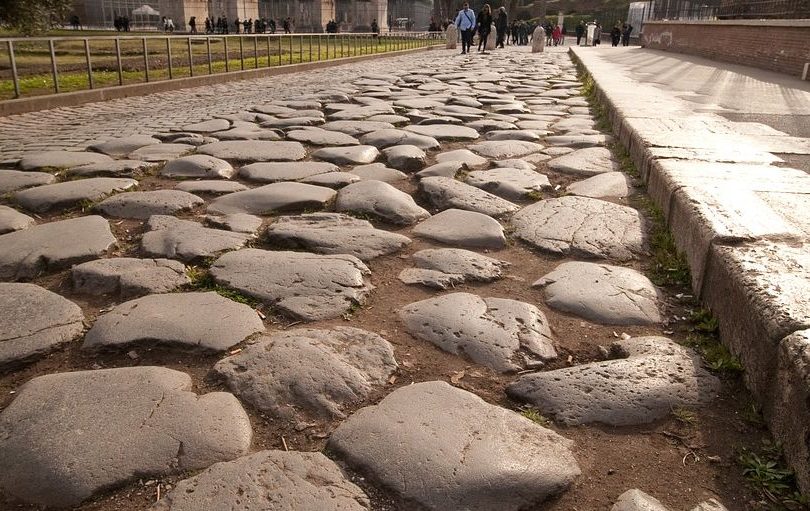 In May 2012 a pair of site specifications for archaeological evaluations landed on my desk that appeared much more interesting than my usual fare, which generally comprises pre-historic sites with varying degree’s of nothingness going on. These two caught my interest because finally it seemed a Roman site had landed on the Roman archaeologist’s desk. After a quick check around to make sure that they were actually intended for me and not the Medievalist I settled in for a read.

It concerned two adjoining sites in the Berkshire town of Sunningdale. A simple case of demolishing the existing structures and building new ones on a slightly different ground plan. Archaeological investigation was required due to the location of the sites. According to the ordnance survey map of the area, the projected course of the Roman road known as The Devils Highway, Margary’s (1955) road number 4a passed right through both sites to such an extent that it should be impossible for our trenches to miss it.

The Devil’s Highway for those not well versed in Roman roads, forms the main route from Londinium (London) to Calleva (Silchester) referred to by Margary (1955) as route 4a. It is known that stretches of this road were visible when Margary was compiling his route list, indeed a stretch is still visible in Bracknell Forest to the south west, however it seems unlikely that the road was visible in the area of Sunningdale and as such the line marked on the ordnance survey map of the area is a projection linking the stretches of the road that were visible. There are also antiquarian reports of roadside  sites to the north of the area that was under investigation however the exact location of such remains unknown.

So armed with a big yellow trowel (a JCB) and two trusty underlings, or digging staff as they are more commonly known I set out for Sunningdale and the unmissable Roman road. Within the two properties it was proposed to dig several trenches, a single 22m long one in the gardens of the first house and three 11m long trenches in the garden of the second.

Problems began right away when the JCB ran over and subsequently destroyed a drain cap and part of the drain in the front garden of the first house.  After half an hour trying to fix the drain and eventually calling out the experts we finally managed to start putting in the  single trench that was planned for this house. It seemed it was going to be one of those days. Within meters we were forced to a halt on encountering live services (electricity cables), we gave it a wide berth, splitting the trench into two parts and continued. Until we encountered another drain. The trench was split once again and so instead of a single trench 22m long we had three somewhat shorter trenches.

There was no sign of the Roman road. In fact with the exception of a field drain and the services we had encountered there was no sign of anything. Where was the road? Using a GPS unit we recorded the trench and checked our location against the ordnance survey map. We were 11m north of the projected line of the road. The presence of the live services had forced us to move the trench slightly and as such we had missed the line. Although Roman roads, particularly major ones tend to be reasonably wide and even at 11m out we might have hoped to encounter part of a flanking ditch or roadside settlement, or even the road itself if it had kicked north slightly, but we had nothing. The evaluation in the first house was a blank.

So we gathered our tools and headed next door hoping for better luck. We managed to put the first trench in exactly as planned, although according to the GPS a few meters south of the projected road line. We came down almost immediately onto a dark fill, we had archaeology! Or did we, closer inspection proved it to be a backfilled ornamental pond, complete with concrete drain. No road.

Trench 2 yielded only another field drain and a possible hedge line. So it was on to trench 3, whose projected location turned out to be occupied by a rather substantial tree. So we shifted it slightly to the north and off the projected line of the road. Once again the search was fruitless, the hedge line from trench 2 was still visible and some other disturbances proved to be root activity from another tree. As one of the trenches was short due to the presence of a modern drain we added a fourth trench to the enquiry. This one located down the side of the house right across the projected line of the road. This was it, we couldn’t possibly miss it with this one.

Trench 4 was 7m long and 1.6m wide. It crossed exactly the line of the road. We were hoping for the metalled surface right there under our noses. Guess what we saw? Thats right, absolutely nothing, the cleanest most undisturbed patch of natural geology we had seen all day. No road, not even loose gravel that may have been ploughed out of a road at some point in antiquity. Nothing. In defeat we called the county archaeologist, who immediately told us to put in a fifth trench wherever we could fit it and she would be out with us as soon as she could be.

Back into the garden we went, around to the space between trenches 2 and 3 and squeezed in the 8.4m long trench 5. It caught the projected line of the road at its southern end, but once more we saw nothing of archaeological interest and with the arrival of the county archaeologist we were finally forced to admit defeat. The Devil’s Highway had evaded us.

Throughout the investigation we had been working on the basis that construction of a major Roman road would have required the digging of flanking ditches and would most likely have been provided with an agger (metalled surface) of gravel or stone. However flanking ditches may have been intermittent or omitted entirely dependent on the nature of the ground and metalled surfaces could have been polished away. The soft geology observed on this site thought would suggest that flanking ditches would have been required for drainage and it seems unlikely that all traces of an agger would have been removed by ploughing in this area (no plough marks were noted). It may be possible that initial construction of the houses involved more landscaping than previously considered and that the archaeology was all truncated away in the 1920’s or earlier, however it seems a far more likely conclusion that the road here does not follow the projected line of the ordnance survey but is located elsewhere in the vicinity. Perhaps to the south where the major A30 road is particularly wide and straight as it traverses this area, and deep flanking ditches may be seen along part of its length. Food for thought perhaps?

For anyone interested in the archaeological report (although I warn you its a dull read) they can be found online on the TVAS website www.tvas.co.uk/ in the report archive with the site codes SAS12-58 for the first house and SAS 12-59 for the second.